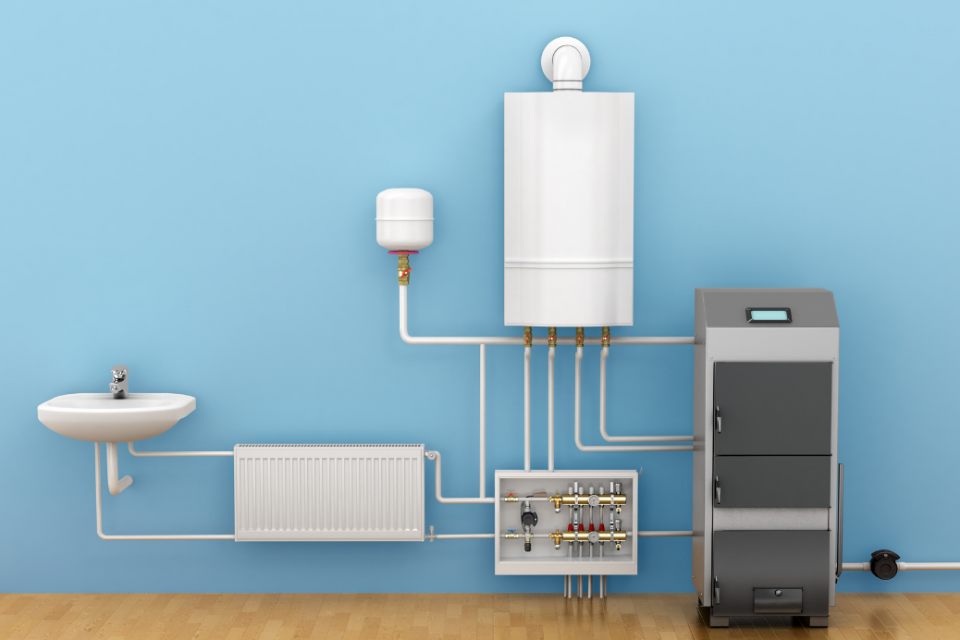 It is now five months since we purchased a high-spec new build property that is heated by a Grant Aerona 3, 10.5kW air source heat pump system, and you can read our initial system review here. The property is situated on a fairly open, windy site, facing south on the edge of a village.

We were complete novices to air source heating systems (and of underfloor heating with individual room thermostats) and to be honest we found the overall setup complicated and complex. The control cupboard housing the hot water tank was a complete mystery, so we put our trust in the developer/installer that it was set up correctly and should not be touched.

We moved in at one of the coldest times of year, during minus temperatures in December/January. The system seemed to be eating electricity with costs much higher than expected and the underfloor heating performance was also disappointing with some rooms failing to get to temperature at any time during the day.

Being one of four new properties our neighbours were equally disappointed and frustrated. I used the Internet to research any other user experiences of air source heat pump systems and found My Home Farm which was very helpful. It was also worrying to read about other similar heat pump experiences consumers were facing.

I perused our technical specifications pack that came with the system and then emailed Grant UK directly to raise my concerns about running costs and general performance. Grant were extremely helpful and responded immediately offering to send an engineer to install a data logger to identify how our system was performing.

Two very helpful Grant engineers arrived and wired up our system to a laptop which remotely monitored the system’s performance. They returned after several weeks of monitoring and made the following changes:

The data logger has remained connected following the changes made by the Grant engineers and we have been provided with a report ‘post’ changes. However, as the end user we are just pleased that our system is now operating much more efficiently.

Grant optimised the system performance, resulting in a much improved response time for heating the house and a lower running cost overall. They were further able to reassure us the system chosen by the developer was more than adequate for the house. The system is guaranteed for two years so that gives us additional peace of mind, and we will take up the Grant annual service plan.

The correct system set up is therefore imperative to ensure customer satisfaction and we feel very pleased that we received the support from Grant UK to optimise our system. We also changed energy provider shaving nearly 5p/kWh from our usage.

Provided this country gets to optimum green energy production, then systems such as these are better for the environment. Our calculations now show it is competitive against oil and LPG.

Lifestyle changes can save over 100,000kg/CO2 in energy savings

Given how many negative stories we’ve heard when it comes to after sales support from various heat pump manufactures where units have been incorrectly installed or undersized, I am very, very impressed with Grant UK, and we are extremely pleased to hear that your system is now running properly and efficiently, Sue. That’s brilliant.

I am, however, curious why they increased the hot water temperature from 45C to 60C. Did they tell why they did that, and is the hot water that is now coming from your taps too hot?

I also wonder if they had some legionella control (ie immersion heater) in the hot water tank – which brought the temperature up at certain times (usually set to night when elec loads are low), this could explain why ASHP was only taking it to 45°C…….but this would depend on what the Coefficient of performance (COP) is on the heat pump @ 60°C. I used to work at a reputable UFH supplier who also solds heat pumps – and COPs of ASHP where around 1.2 to 1.5 so the additional costs of raising the temp inside the tank to 60°C with an imersion was not seen as a large extra expense whilst also ensuring the heat pump isn’t being worn out quicker than it ‘could’.

Our system definitely has a boost facility for legionella prevention. Via an immersion heater which is left switched on. This raises the temperature to 60 degrees for an hr per day.

Very interesting Sue. I am also looking at tweaking our HW and thermostat settings. What times of the day did Grant recommend having the water heating on? Our HW is 50 deg and that is easily hot enough.

In response to questions from Mars and Kevin.
Not being a technician it’s difficult to know why Grant increased our hot water temp from 45 to approx 55/60 degrees . The hot water is not scalding but seems just right.
Regarding timings of the hot water ours is on for 3 x 1hr periods per day , 7- 8a.m 5-6 pm then again 11-12midnight to coincide with daily shower times. We have 2 quite powerful showers and a large bathtub and have not been short of hot water.

Hi Sue. I’m really interested to read your experience of the 10kW Grant Aerona as I’m a complete novice to this!. I’ve just started a thread this morning about ours and the fact that Grant have come out and done some homework on yours is useful to know. I spoke to Grants this morning and they were a bit troubled when I thought the water temperature ought to be lower than 55 degrees as I thought it was too hot and therefore using a lot of unecessary energy. They must have their reasons for wanting it high but they didn’t really clartify why.

The builder used a local plumbing firm to install the full system, and following initial concerns about the system performance during Dec/Jan I contacted Grant for a view.

Grant engineers monitored the system and identified a number of shortcomings. For example, lots of air in the system, pipework reorganised into hot water cylinder, timer, immersion heater setting for legionella.

One year on we had our first annual service with only minor tweaks required.
The engineer did confirm the water temp of 55 degrees.