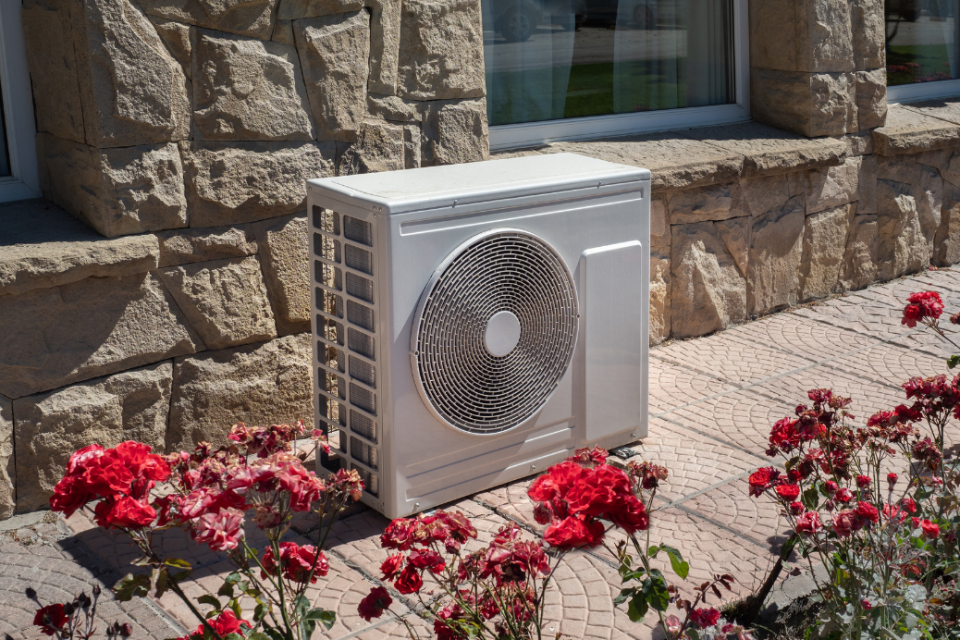 A little science before we start. Energy cannot be created or destroyed, it can only be changed in form. Virtually all substances – solids, liquids and gases contain a level of energy. The higher the temperature of a substance, the more energy it contains.

When substances change state – from solid to liquid, liquid to gas or vice versa – their energy level can change quite dramatically. For example, steam at 100C contains significantly more energy than water at 100C.

The Constituent Parts of an Air Source Heat System

Compressor: an electrically driven pump, used to increase the pressure of the refrigerant gas.

Condenser: a heat exchanger, where heat energy is transferred from the refrigerant gas to the water circuit of the central heating system.

Expansion valve: a control valve which allows the refrigerant to pass from the condenser to the evaporator.

Evaporator: a heat exchanger where heat energy is transferred from the outside air to the refrigerant gas.

The refrigerant gas used is chosen so that as the pressure and temperature falls it changes state from gas to liquid and in doing so becomes quite cold.

If the refrigerant, which is now a liquid, were to enter the compressor then it would cause damage. It is therefore necessary to change the liquid back into a gas. This is achieved by a further heat exchanger called the evaporator.

Outside air is used to heat the refrigerant, and as the name implies causes the refrigerant to change state from a liquid to a gas. i.e. to evaporate.

As with water, when it is converted into steam, the refrigerant absorbs and contains much more energy in its gas state than its liquid state, although its pressure has not changed appreciably.

To ensure that the refrigerant gas is ‘warmed’ in the most efficient manner, an electrically driven fan is used to blow fresh ‘warmer’ air onto the evaporator.

By utilising the properties of the chosen refrigerant gas to change state at particular temperatures and pressures, it is possible to extract energy from cold ambient air. The amount of energy which can be extracted from the air can therefore be several times that of the electrical energy used to operate the air source heat pump.

If you think of how a car operates under varying road conditions, it uses much more fuel going up a hill rather than running at constant speed on a flat road. An air source heat system is the same, in that as the ambient air temperature falls (going up a hill), the heating demand of a home increases, and the air source heat pump must work harder to provide the necessary quantity of heat energy to keep the home at the desired temperature.

It is therefore important that the selection and sizing, not only of the air source heat pump, but also the component parts of the central heating system, are made to cover all eventualities. Not having sufficient heating during sub-zero weather conditions is something few would relish.

What is a heat loss calculation?

Is a heat pump sized in the same way as a fossil fuel boiler?

What is the difference between air source and ground source?

What is COP? - Renewable Heating Hub

[…] Outdoor air always contains heat energy even when it’s below freezing. To be able to maintain a constant energy output to heat a home the compressor must work harder to raise the temperature of the gas and the fan must blow more air through the evaporator to extract the same energy as it did at temperatures above freezing. You can find out more about how a heat pump works here. […]