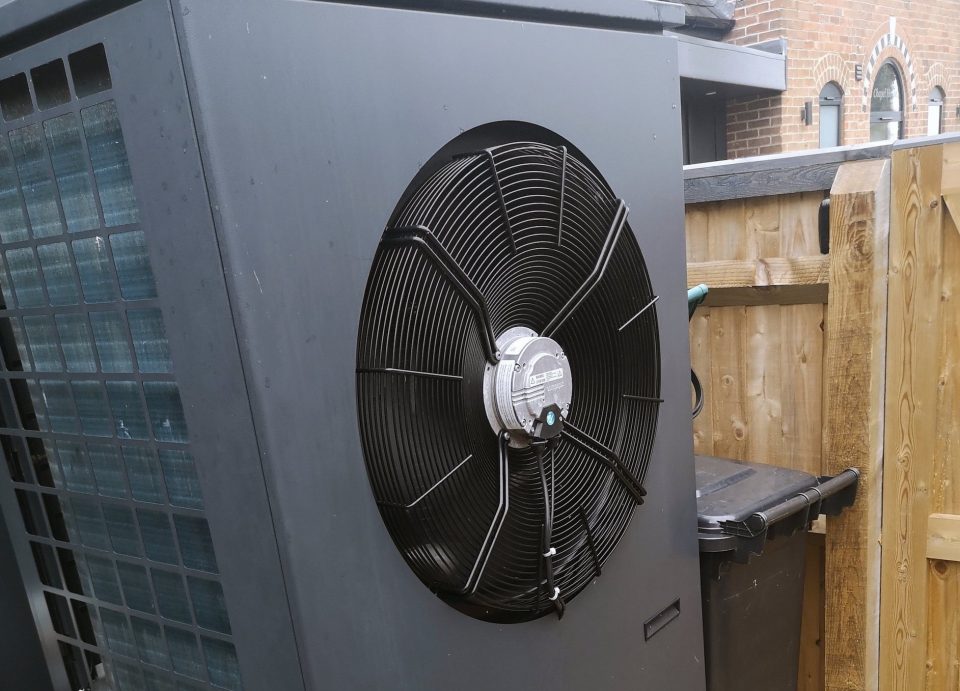 The house we installed our Caernarfon 18kW air source heat pump (ASHP) in was a renovation project with us moving in as the heat pump was commissioned in October 2018.

The house is a mix of three equal areas: an old chapel from 1880, an extension from 1980 and a new build. We gutted and rebuilt the property and were able to specify a high level of insulation from the start. We decided to install an ASHP quite early on and that guided many of our build decisions.

The house itself is in an extremely exposed location, at the top of a rise on one side and at the end of a long field on the other. The wind is severe and each winter we’ve lost ridge and roof tiles.

Why did we choose an ASHP?

The house was previously on LPG, with a large storage tank outside (about the size of a small car). There is no gas in the village. The cost of oil and LGP moves regularly but is generally expensive and we were keen to use a source of heating that was renewable.

We were advised that, because we were renovating, we would be eligible for the Renewable Heat Incentive (RHI), which we were. I’d say that it pretty much covers the cost of the pump. Be sure to make sure you collect information for the RHI application form as you go along, particularly an EPC before any work to improve insulation starts, and then again when it’s finished. Keep invoices and evidence (like photos and certificates). You should absolutely make sure that your ASHP manufacturer and installer is registered so that the RHI can be granted.

In general, ASHPs only heat water to about 50C – which is cool for a boiler. You need to make efficient use of that heat. Therefore, there are two key decisions.
1. Insulation – mentioned above and can’t be over-stated.
2. Surface area to radiate heat. You’ll need a larger surface area than water heated from a gas boiler. They say that radiators need to have three times the standard surface area – so you either need a long run for a radiator, vertical radiators or triple radiators that are thicker and probably aluminium.

The very best surface area in a house for heating is the floor. It sounds simple but there are some considerations. You can’t heat a floor above 35C which is absolutely ideal for an ASHP because that’s when they are at their most efficient – great. But it can limit your floor covering choices.

Pretty much the best choice is tiles; anything else will act as an insulator (like wood or laminate). Most people consider tiles to be ‘cold’ and will want a rug of some kind, but again there are limitations. If you use a rug then you are blocking heat and, believe it or not, rugs have a TOG rating and you shouldn’t use a rug with a TOG rating of >5 – or better still no rug at all.  Also, most people don’t have a tiled floor upstairs, which will leave radiators on the upper floors.

The ASHP is large and requires a concrete plinth outside – ideally you need it located so that the pipes go directly from the pump to the hot water tank in the shortest distance.  Also it will require two separate electrical feeds from the consumer unit – but not just any feed – they need to be high rated feeds, each with their own RCD.

We also chose to put in a log burner for backup – we’ve had one previously and they work well.

Space – because of the decisions we’ve made about underfloor and the fact that the hot water tank is larger (twice as tall) than for a gas boiler, you tend to need a considerable amount of inside space for the various bits and bobs. You should consider this.

Electricity meter – there is possibly a benefit to having a smart meter (we don’t have one)  but it may give you access to different electricity tariffs at different times of the day and night – which could benefit, or at least inform, your ASHP configuration and timings.

Solar – we don’t have it, but it’s pretty much a no brainer. If you can produce electricity that the ASHP can consume then it’s a real winner.

Legionnaires – the ASHP has an electrical booster to take the water temperature over 60C every seven days. The booster will use more direct electricity to do this.

Remote monitoring – Global Energy Systems monitor and can control our unit remotely. That connection is via the mobile network and where we are they needed a larger antenna to get a reliable connection. Data is also sent back so that you can review your usage online – sometimes that was missing for us until they up-rated the antenna.

Fan noise – it’s just not an issue because it’s not that loud. That said, if it was outside your bedroom window you’d notice. Ours is out of the way.

We have UFH downstairs throughout. The areas are zoned and controlled with room thermostats. Upstairs we have radiators with thermostatic valves (TRVs).

The controller that comes with the ASHP will tell you what’s going on and alert you to any faults. It has two modes – one for the consumer and another for the engineer with more detail.  The system will always prioritise domestic hot water (DHW) which means that you can have a situation where the room thermostats are calling for heat but the system is only heating DHW (typically after a couple of people have had showers). Until the DHW demand is fulfilled then it will not switch to central heating. The unit heats the DHW using a higher flow temperature from the ASHP than for the underfloor which it has to get down to about 40C so that the floor doesn’t get too hot.

I should add that if the water is too hot then you will mix it with cold, which seems pointless. So we’ve lowered the hot water tank temperature down to about 47C.

We have a spare room that is currently not used, and we have the UFH set lower there.

Currently I have the living areas downstairs set to achieve 20C throughout the morning and day time; then the main living area is set to 21C for the evening. Overnight they are set back to 18C. I’m currently reviewing this approach.

When we first turned the heating on in October (or whenever it was) it can take a week to get the concrete slab up to working temperature. I expect higher electricity costs at that time.

We’ve had a fair number of faults with the system – but none really serious.

I’ve cleaned the filter twice. Once soon after it was commissioned and there was fair bit of crud from the installation. The second time it didn’t need it.

We’ve had number of failures indicating that there’s a problem with the probe (probe failure). I’m not entirely sure which or where this probe is but I think it’s in the booster.  The remote engineer is tweaking the setting to try and avoid this.

We’ve had ‘low flow temp during defrost’ which is a transient issue. It indicates that not all the ice has been cleared and it should attempt to defrost it again. However, it’s poor software design because that it sets the alarm going that needs clearing – which is needless.

We’ve had serious high pressure alarms which have indicated a pressure drop and requires a bit of investigation. It could be the filter is blocked (it was once) or the system pressure has dropped below 1 bar which it had (see below).

There are a couple of design issues within the ASHP (that I’ve let Global Energy Systems know about).

Filter location. Given that thisis something the householder can (and is expected) to do, the location of the filter and access to it is not the best. For such a basic and simple task, if the location was better thought through then it would be quicker and more straightforward if it was positioned better.

The auto air valve location. It’s really, really bad. The idea of an auto air valve is that if there’s air trapped in the system then this simple device will vent the air. However, they do fail and when they do then they will drip or leak water. The manufacturer has situated the air valve above an electrical box supplying the booster with power. The box is supposed to be sealed but if water gets in then it will trip the RCD (which it did). Also, the auto air valve has, within it, a plastic float to operate the valve. But they have located it right next to the booster – which can get extremely hot and potentially damage the plastic and cause the valve to fail (and leak water all over the junction box).

The auto air valve issue will lead to potentially way more issues than you first think. For example, if the filter gets blocked and the pressure drops then it’s an easy fix – clean the filter. But if this happens when the booster is called then the water in the booster can get so hot that it becomes steam and will damage the air valve causing it to fail and leak water over the power junction box causing electrical items to either burn out or (more likely) trip the booster RCD, which you won’t notice for days.

This poor design issue has created a multitude of problems that could have been avoided.

So, what do we think?

Over the time we’ve had the system (over two years) I still feel like I’m getting used to how to set the floor and thermostats optimally – it requires a fair bit of messing about.

Global Energy Systems do a good job of monitoring the system and contacting us if there are issues.

We’ve not suffered any serious problems and the house is warm enough most of the time. The pump works harder when the temperature is below about 3C. There’s no question of that.

We’ve just come out of a very cold period when the outside temperature was below -2C for pretty much the whole week (February 2021). The ASHP was fine, but working very hard.

Our main issue at the moment is trying to select an electricity provider at a reasonable rate – they all seem to have gone up.

Your Caernarfon 18kW issues seems to be inline with Mars’s.

I’ve had my Mitsubishi ASHP system installed for a few months now and it’s become apparent that its going to be very difficult to work out or test for the most optimal settings, partly because you can’t replicate the weather conditions/temperature month by month.

Your electricity consumption for 2020 is excellent though. 5548kWh for the full year. Is that correct?

Hi Mark – yes correct for the year. Probably be more this winter – more people in the house and full lockdown.

Nice description Mike – thanks, The Caernarfon is a big beast of an ASHP. 1.314m3 which would be outside permitted development planning regulations – I think that is below 0.63m3. As Mark says, low energy usage, which is good. How does it compared to your predicted MCS estimate? What was your EPC and energy demand? Sorry for all the questions, but my bungalow is similar 204m2, EPC B, just over 20,200kWh of heat demand and almost 3,000 of h/w. We have installed a Daikin 18kW ASHP – see the Worcestershire thread, with estimated 7,500kWh electric demand.