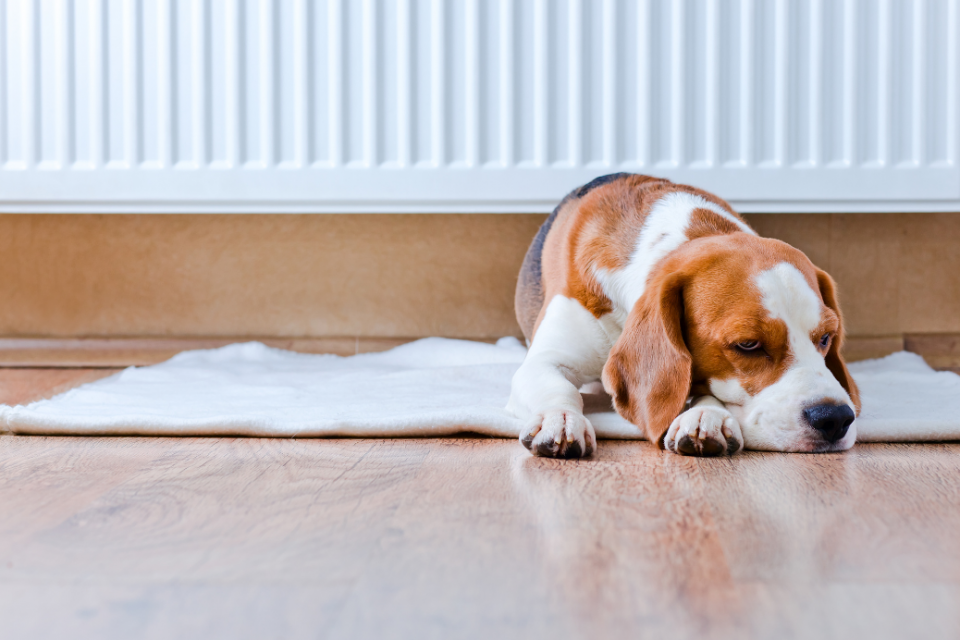 I wanted to take a closer look at weather compensation and heat pumps and see what effect it has on the running costs of a heat pump. Excuse my questioning the perceived wisdom, but I was raised to question absolutely everything I was ever told and believe nothing unless I had the hard facts. So here we go.

Sadly, it has taken me 12 years to realise it might be written by someone in marketing who had never seen a heat pump, let alone actually tried it out.

I’ve had four heat pumps at home over the 12 years and I always install the latest unit we are selling. The weather compensation is the same on all of them. My house was built in 1922. It’s a thermal disaster despite us installing lagging wherever possible. If the temperature outside falls below 18C we have to put the heating on to keep a 21C room temperature. When the weather outside is -2C (our design temperature) we need 7kW of heating.

In essence, working out how to set the weather compensation up is simple. Assume the radiator output is 0kW at 18C ambient and 7kW at -2C. Work out the output per radiator and you get your delta T from room to water inside the rad. This gives the theoretically perfect weather compensation curve. But theory and comfort are very different.

When I first installed my Samsung EHS generation 3 monobloc I had a laptop connected to it so my Korean colleagues could monitor it from Seoul. My house was the test site for six months prior to launch. I tweaked and tweaked the curve, so that it was perfect. I managed to get the weather compensation so tight we maintained a constant 20.8C in the house and the heat pump never stopped.

There was one problem. The radiators were always cold to the touch and my wife hated it. The most common complaint was, “When you lean on the radiators, they are tepid, and my friends have all got lovely warm radiators.”

So when I wrote the setup manual for Samsung heat pumps in 2012, I decided that we would never let the radiators drop below 37C because 37C is the magic temperature where the radiators actually feel warm. In most houses this is too warm, so the heat pumps cycle, but it stops homeowner complaints. Every Samsung unit sold ever since then is set up like this, and all the other Samsung wholesalers nicked my manual and copied it. It’s hilarious. They have no idea, until now, why its set up like this.

In late 2019 we got a new machine from Hitachi called a mini mono. It’s a ridiculously small 9kW heat pump which has all the same boring features as every other unit on the market, and it’s beige. Yawn! But it has one amazing feature. You can chuck all the controls away and run it off a 240V run signal at one temperature just like a boiler. This means you chop out your boiler, stick one of these in, wire the old tank and room stat to it and leave. It’s just a heat pump boiler, when you say go, it runs at 60C, when you say stop it stop. It’s truly one of a kind.

For the first time a heat pump manufacturer has done something the heating engineers want.They essentially made a boiler. Any heating engineer can wire and pipe it up, S plan or Y plan just like it’s always been. I told all my customers about it and they all said the same thing – it’s brilliant, but what about weather compensation? It’s going to cost £1 million a year to run at 60 C.

So, I thought I would test it out at home.

I have an MMSP metering package at home which measures the energy used and the amount of heat produced. It reports back to Ofgem who pay me for the data every year, so measuring the effects is really easy. On February 1, 2020, I took my readings for January and reprogrammed my heat pump to run at 55C flat in heating. On March 1, I read the metres again and the results are in.

For reference, the winter in 2020 was very mild. The temperature in Southampton has only dipped below 0C twice between January 1, 2020, and March 1, 2020. The weather has been between 5 and 10C the whole time and it’s never stopped raining. In these conditions this is where weather compensation is doing its work, so it’s been ideal for this trial.

Here is all the maths you need. We have two electricity metres for economy 10, one for night and one for day. They measure the whole house consumption. I have two meters on the heat pump. One measures the outdoor unit including the water pump and 3 port valves, while the second measures the indoor controls and the MMSP’s consumption. We also have a heat meter measuring the output of the heat pump in all modes.

In conclusion, weather compensation marginally increases the COP from 2.7 to 2.91. That’s less than 10%.

I can’t help thinking it’s worth considering a much simpler and cheaper system which is easy to set up and easy for the homeowner to understand if the increase in running cost is only 10%. If the installer has trouble setting up the unit correctly at the beginning, the running costs can spiral out of control making that 10% seem like a good deal.

Heat pump geeks aim to get the best out of the unit so 10% is too much for them to throw away. But most people are not geeks. They just want to fit the unit and get it going. I can never understand why every manufacturer makes heat pumps so bloody hard to use.

But hold on. What does the consumer think?

My wife still isn’t completely happy. When the rads are hot everything is sweet in the Hendra house. “That’s more like it,” she says, but then the stat satisfies, and the rads go cold again, and the happiness evaporates.

I think it’s a lot less comfortable despite the room temperature only cycling a degree or so. And the pump going on and off annoys me. So what I’ve done is set it back to weather compensation again, because I can’t live with the inefficiency. Let’s see what the marketeers make of this.

Thermal stores and heat pumps are a big no-no

Interesting article. So Graham, what is your final verdict?? I don’t understand your last paragraph. Sorry

pretty simple really, if you want weather comp use it, if you dont, dont. It makes a bit of difference, between 10 and 20% saving. If you like your rads hot its not nearly as bad as we heat pump experts tell you.

Great article… like all discussions about savings its never straightforward and open to multiple interpretations. Bearing in mind I have been installing these controls for over 15 years my observations are:

1)As room temperature relates directly with flow temperature all adjustments result in higher or lesser heat usage directly
2) Keeping heat pumps temperatures as low as is possible minimises stress on the machine, this you do see in longevity
3) Stable room temperatures are a by product weather compensation which allow users to lower room thermostats for the same comfort level
4) One port of call for all issues or clarification about heat pumps as the controller has the same brand as the heat pump, no blaming anyone else!

15yrs Experience shows that the multiple benefits of weather compensation are well worth it, in terms of savings, reliability and comfort levels.

Graham is fortunate if he doesnt mind spending an extra 10% in energy usage…but with rising energy prices no everyone may agree!