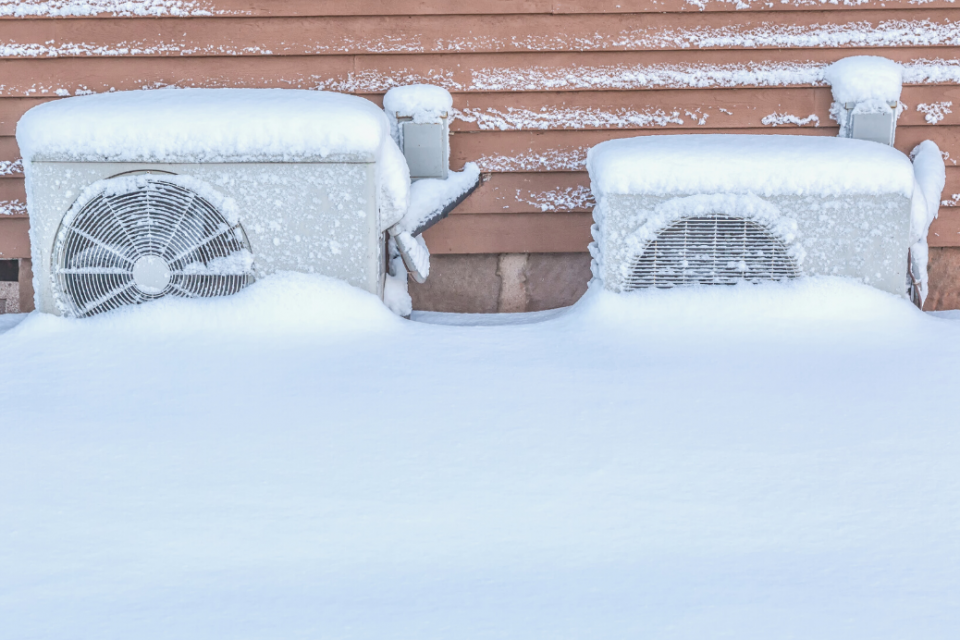 Monobloc heat pumps are basically just a boiler (or water heater) that lives in the garden – the bit that heats the water is connected by pipes back into the house using standard plumbing pipework which heat your radiators and hot water. This simple solution is actually the unit’s Achilles heel, because when we take the water outside there is a possibility it could freeze in cold weather.

Manufacturers and installers do what they can to avoid this by insulating the pipes, while all good heat pumps also have built-in protection to prevent them from freezing up. This takes the form of running the pumps if the ambient temperature is below zero and running the heat pump occasionally to keep the water above 10C. Most of the time there is nothing to worry about – if it’s cold outside the heating will be on, the unit will be running and the water will be warm, but in a power cut you are at the mercy of the elements.

All but a tiny number of manufacturers recommend you put glycol (anti-freeze) in your air source heat pump to prevent it from freezing up. Everyone knows that water expands as it freezes, so when this happens in a plate heat exchanger the exchanger is damaged creating leaks across the plate so the heat pump won’t work anymore.

Some people even say MCS make us put glycol in heat pumps – they don’t. MCS only make you put glycol in ground source units. In most cases it’s a warranty condition from the manufacturer. Apparently it is put in there to stop the unit from freezing up if the unit is not working and it’s very, very cold outside.

The glycol we all use has to be food grade so that it is not poisonous if you drink it. The reason for this is that there is a faint possibility that the water going through the heat pump could leak into the hot water cylinder and hence into the water you bathe in. Now we at Hendra Towers have a rule that if the water comes out the shower head any colour other than clear, we don’t drink it, but apparently not everyone does this, so. we have to protect the stupid. There is also a small group of people who like to drink radiator water and we have to protect them too.

The problem I have is there is a lot of inconsistency and I’m not sure most people really have any idea why the glycol is in the system at all. It’s just put in there because it’s what people have always done, so let’s explore this subject a bit more.

Exhibit A: If you have an oil boiler which lives in the garden, what prevents it from freezing up if there is a power cut in the middle of a freezing cold winter night? No one ever puts glycol in an oil boiler.

Exhibit B: Have you ever met anyone who has actually seen an oil boiler that has frozen up? Please discount anyone whose uncle’s best mate once knew a man who heard about a boiler freezing up or any expert on Facebook.

Exhibit C: If the heat pump froze up and was ruined, surely it would be covered by your house insurance just like your pipes, radiators, oil boiler, etc.?

Exhibit D: Some really good heat pumps absolutely forbid you from using Glycol at all (RED, for example). So what’s so special about these units? Why don’t they freeze up in power cuts?

Exhibit E: Glycol has a lower thermal weight (specific heat capacity) than tap water. So you have to move more of it to carry the same amount of heat, but it’s sticky, so you have to pump treacle quickly, that means big pumps and bigger pipes, which means lower COPs and more cost. Surely every manufacturer would avoid this stuff if possible.

Now let’s do this thought experiment. If you took a heat pump and filled it with tap water and a splash of inhibitor, put it on a pallet and delivered it to the local Waitrose who kindly put it in the freezer overnight, do you think it would freeze up and how quickly?

Think a bit more. The unit is running; it’s -2C outside, the heat exchanger is full with three litres of water at 50C, the refrigerant on the other side of the plate is also hot. The plate is housed in a metal box with the compressor (basically 25 kilograms of hot iron) and a load of warm pipes, see below. The metal box is insulated for sound and heat retention. None of the cold parts of the system are in this box. The power goes off. Just how quickly do you think that lot will get to be below zero and freeze up?

The first experiment was tried by RED (and a few others). It takes ages to actually freeze up – well over 24 hours at -15C, in fact. If the unit had been running as per the second part of the experiment it would take even longer. Where I live in Southampton, if the power was off for 24 hours the streets would be full of rioters, and my heat pump would be the least of my worries.

So why put glycol in? The answer is it is to protect the unit from itself mixed in with a bit of tradition.

In defrost mode all heat pumps cool the water going round the house and heat the coil outside, to remove the ice.

You would think that if the water going through the unit got anywhere near the freezing point the unit would stop to protect itself. Every chiller (basically an air source heat pump designed to cool not heat) has this as the number one safety device. Years ago when air source heat pumps were new someone forgot to put this safety device in the software of their heat pump so we had to put glycol in. Of course it caught on so we all put glycol in now “just in case”.

I would ask your sales rep if the unit they are selling you protects the system in defrost from freezing itself up. If it doesn’t it’s rubbish and you should tell them so. I bet you that 99 out of 100 sales reps have absolutely no idea, so prepare for a BS answer.

Last week a manufacturer contacted me about their new ultra high temperature, monobloc unit. As part of the presentation freeze up control in defrost was one of the first features mentioned, which I think is a step in the right direction.

Are we seeing the end of glycol in heat pumps? I certainly hope so.

hi that’s so far the only one opinion I could found in Internet.
I’m looking for reason not to put glycol in the heating system as it has 1000 liter of water (750 liter buffer tank).
to be or not to be – that is the question 🙂